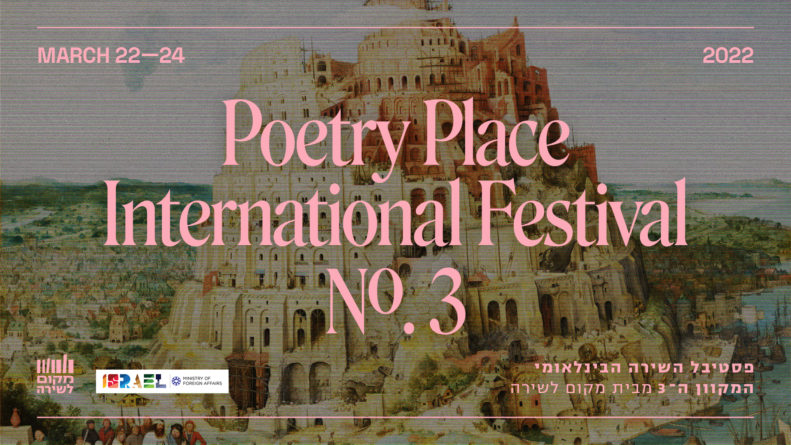 We are delighted to commence the third Virtual International Poetry Festival from the home of Poetry Place. The festival will take place Tuesday through Thursday, 22-24.3.2022, during the evening hours (06:00-09:00 PM, Israel time zone) on the ZOOM platform. Each hour will be devoted to a different poet from across the sea. The poets will be hosted by Israeli translators.

The virtual festival initiates a direct and intimate connection between the literary communities of Israel and the world and allows readers from all different kinds of countries a glimpse into the workplace of the great poets of our time. The festival grants any person with a computer or smartphone the opportunity to meet these poets, hear their poems in their original tongue alongside their Hebrew translation, and to catch a peek of their personal libraries.

Dinu Flămând was born in 1947, Romania. Poet, translator, essayist, and critic. He has published sixteen books of poetry that have been translated into many languages, and in 2011 he won the Mihai Eminescu National Prize for a life dedicated to poetry. He has translated 25 books into Romanian and is one of the founding members of the literary society Echinox.

Elisa Díaz Castelo is the winner of the Bellas Artes Poetry Prize 2020 for El reino de lo no lineal, the Alonso Vidal National Poetry Prize 2017 for her first collection, Principia (Tierra Adentro, Mexico), and of the Bellas Artes Prize in Literary Translation 2019 for her rendering in Spanish of Ocean Vuong’s Night Sky with Exit Wounds. Her Spanish poems have been anthologized in works such as Voces Nuevas 2017 and her English poems have appeared in Poetry International, Tupelo Quarterly and Border Crossing, among others.

Kim Addonizio was born in 1954 at Washington, D.C., United States. She has authored a dozen books of poetry and prose, most recently the poetry collection Now We’re Getting Somewhere (W.W. Norton). Her honors include fellowships from the National Endowment for the Arts and the Guggenheim Foundation, and her work has been widely translated and anthologized.

Howard Altmann is the author of four poetry books, most recently, Forgive Time, a collection of 40 selected poems translated into Hebrew by Tal Nitzan, and published by Keshev Press, the premier publisher of Hebrew and World poetry in Israel. Howard’s poems have appeared widely, and John Ashbery has written about his poetry, “Howard Altmann’s surprised and surprising environment is a quietly brilliant achievement.” Of native Montreal he holds degrees from McGill and Stanford.

Valerio Magrelli, born in Rome in 1957 is a Full professor of French literature at Roma Tre University. He has published six books of poetry, the pamphlet in verse Il commissario Magrelli, and a cycle of four prose texts. He is a translator, researcher and publisher of renown literary figures such as Molière, Valéry and Baudelaire. He directed the poetry series La Fenice Guanda and the trilingual series Scrittori tradotti da scrittori. His books are translated into about twenty languages.

Nathalie Quintane, born in 1964, first published her first texts in poetry magazine s then, with P.O.L., books without generic indication (Chaussure, 1997; Tomates, 2010; La cavalière, 2021 etc.) as well as two novels. She participates in many public readings, in France and abroad.

Linda Maria Baros is a Poet, a Translator, and a Publisher. She was born in 1981, holds a PhD in Comparative Literature from the Sorbonne University and currently lives in Paris. She has published 6 books of poetry and her most recent collection of poems was awarded the Grand Prize for Poetry 2021 of the Writers' Society – France, the International Francophone Prize 2021 of the Montréal Poetry Festival, and the Rimbaud Prize 2021 of the Poetry House from Paris. Her poems have been translated in 40 countries.

Bejan Matur was born in Maraş, in 1968. Her poems were translated into 36 different languages and granted with numerous awards. She has published 11 books, 9 of which are poetry. Her music accompanied poetry was presented to a wide audience at prestigious stages like Royal Opera House, Ubud (Bali) and Princeton University. Bejan Matur is a graduate of the Ankara University Faculty of Law, and currently lives between London and Istanbul.

Charles Bernstein is an American poet, essayist, editor, and literary scholar. He is the winner of the 2019 Bollingen Prize for Near/Miss (University of Chicago Press, 2018) and for lifetime achievement in American Poetry. He is the author of Topsy-Turvy (Chicago, 2021) and Pitch of Poetry (Chicago, 2016). Bernstein is Regan Professor, Emeritus, of English and Comparative Literature, at the University of Pennsylvania and a Fellow of the American Academy of Arts and Sciences.

Paul Muldoon was born in County Armagh, Ireland in 1951 and now lives in New York. He is the author of fourteen collections of poetry and has won many awards including the 1972 Eric Gregory Award, the 1994 T.S. Eliot Prize, the 2003 Pulitzer Prizeand the 2017 Queens Gold Medal for Poetry. He was A former radio and television producer for the BBC in Belfast, he has taught at Princeton University for thirty-five years. He is a Fellow of the Royal Society for Literature and a Fellow of the American Academy of Arts and Letters.